“At the end of the show the hypnotist told his subjects ‘Awake.’ Something unusual happened.

One of the subjects awoke all the way. This had never happened before. His name was George Nada and he blinked out at the sea of faces in the theater, at first unaware of anything out of the ordinary. Then he noticed, spotted here and there in the crowd, the faces of the Fascinators.” —Ray Nelson, Eight O’Clock in the Morning.

I have come here to chew bubblegum and tell you about the short stories behind the films you love. And I’m all out of bubble gum. Welcome to Page to Screen, where I will opine on the film (and TV) adaptations of horror and fantasy short stories, books and novellas. Today’s topic is…John Carpenter’s “They Live.”

If you’re still reeling from the revelation that the sci-fi film starring Rowdy Roddy Piper was based on a short story, you aren’t alone. I’m a huge fan of the film and for some reason, never paid attention to the part of the opening credits that said the movie was based on the story “Eight O’Clock in the Morning” by Ray Faraday Nelson.

I tracked down a copy of the original story, which wasn’t easy, because although it’s been reprinted many times, none of those anthologies are currently in print. It is out there in bootleg format, but boo! Let’s not feed the pirates, right?

Anyway, “Eight O’Clock in the Morning” first appeared in the November 1963 Magazine of Fantasy & Science Fiction. Then, in 1975’s Tales of Terror from Outer Space, again in Reel Future in 1994. I found it in the Young Oxford Book of Aliens (1998). It was adapted into the comic book Nada in 1986, and that is where director John Carpenter first saw the story, according to Nelson.

If you’re asking “who is this Nelson guy?” He was a prolific cartoonist and writer who was besties with Phillip K. Dick. He’s known for his novels Prometheus Man and the Ganymede Takeover (co-authored by Dick.) He has another cool claim to fame that I’ll talk about later.

Now, back to “Eight O’Clock in the Morning.” The story follows George Nada, an everyman who went to a hypnotist’s show and was accidentally fully awakened at the end. As in, awakened to a worldwide conspiracy. He can now see the lizard-like alien creatures that have invaded Earth, and have used hypnotism via subliminal messages to hide their true identity from humans. The creatures send subliminal messages meant to control humans via advertising posters. “Work eight hours, play eight hours, sleep eight hours.” and “Marry and Reproduce.” The Fascinators, as they are called, control all of the television stations, and broadcast a constant stream of hypnotizing messages, such as “Obey,” “Work.” “Obey the government. We are the government.” and “We are your friends.”

But they aren’t, are they? George pretends he isn’t fully awake because he is confused and overwhelmed by his discovery. When he arrives home, a Fascinator calls and orders him to die of a heart attack at eight a.m. the following morning. They’re on to him. And so he decides he’s going to make the last night of his life count. He isn’t sure how one man (literally, a nothing, a nobody hence his name, Nada) can clue the entire human race in to such a big conspiracy, so he goes to his girlfriend’s house to see if he can at least convince her. She doesn’t believe him, but George does kill her neighbor, a Fascinator with a fridge full of half-eaten human parts and a tank full of giant slug-like alien babies. George discovers that each alien carries a fork and knife set designed for eating people and a small radio transmitter. The murder makes the news, and George becomes a target, his face flashing as a criminal on the run on every television station. Which is when he realizes the Fascinator broadcasters seemed scared of him. “Why should he be?” Nada says. “What could one man do?”

Indeed. “Then it suddenly struck him that the Fascinator on TV no longer seemed to have any power over him…it has to believe it can master me to do it. The slightest hint of fear on its part and the power to hypnotize is lost.”

George sees his opportunity. He goes to the TV station, kills the alien broadcaster, stands off camera, imitating its voice and tells the humans to “Wake up. Wake Up. See us as we are and kill us.”

Ray Nelson’s story packs that epic storyline into five measly pages. That’s it. Five. Pages. It’s the shortest of short stories, spare in the extras, like backstory, enabling the reader to imprint himself on Nada, by focusing only on the details that propel the story forward.

Despite the small size of the source material, John Carpenter’s retelling is actually quite faithful. Seriously, if you read the story synopsis above, it’s like reading a summary of the movie. The movie is fleshed out and dialed up to eleven, of course, but faithful to the underlying shtick: That we are all receiving constant subliminal messages aimed to control us, to get us to obey, to reproduce, to follow the script of what it means to be a ‘good’ citizen, to consume, messages designed to make us complacent and keep us in line and striving, and showing up for work every day, designed to lull us out of a revolution.

Carpenter kicks it up a notch, by giving the story more context. He tells the story from the point of view of an everyman, “John” aka Roddy Piper, who is homeless and struggling to find work. Carpenter adds in another layer of social commentary about corruption, income inequality, and corporate greed. The message is clear: the rich and powerful (who happen to be aliens) plan to use up earth’s resources at the expense of all of humanity. Economic and government systems are failing most citizens, while the rich and powerful at the top benefit. The revolutionary forces try to reveal the alien conspiracy, try to break through the TV noise.

Their message: “The poor and the underclass are growing. Racial justice and human rights are nonexistent. They have created a repressive society, and we are their unwitting accomplices…We have been lulled into a trance. They have made us indifferent to ourselves, to others. We are focused only on our own gain.” 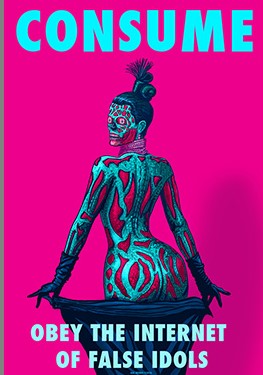 Um…yeah. If that doesn’t eerily sum up the state of America in 2019, I don’t know what does. which is why this film is still relevant three decades after its release. Its themes and images are still being used as social commentary, for instance, by artist Hal Hefner. And, of course, this lovely commentary on the message of the Kendal Jenner Pepsi ad that Pepsi (read: consumption) will quell racial violence.

Of course, Carpenter’s aliens are not multi-eyed lizards, but corrupted human-like things with silver bug eyes, a conscientious choice that Carpenter said was made to drive home his focus on corruption and greed. “All the aliens are members of the upper class, the rich. And they’re slowly exploiting the middle class and everybody’s becoming poorer,” Carpenter said. “Everything we think about buying cars and pools and condos, and all the things that everybody strives for in America are basically created by this race of inhuman creatures that really just want to exploit us like a third world.”

Nelson may have been ahead of his time in other works as well. In his 1978 novel, “Revolt of the Unemployables,” technology has created vast unemployment, and those without jobs are imprisoned only because they have no job. This story line is eerily relevant given a near-future where AI might replace most jobs, leaving large swaths of the population out of work, with no safety net. So…looks like that’ll be the next book on my to-read list.

Still, Nelson does not believe he will be remembered for his contributions to science fiction and fantasy literature. You see, Nelson has another claim to fame. He invented the propeller beanie hat in 1947. Yes. That hat. “Centuries after all my writings have been forgotten, in some far corner of the galaxy, a beaniecopter will still be spinning,” he said.

FYI, Ray Nelson will be celebrating his 88th birthday on October 3, 2019. So let’s all wish him a super happy birthday!

Now for the cool extras:

Here’s the link to an audiobook read-along of the short story Eight O’Clock in the Morning.

Here is a cool interview with John Carpenter about “They Live.”