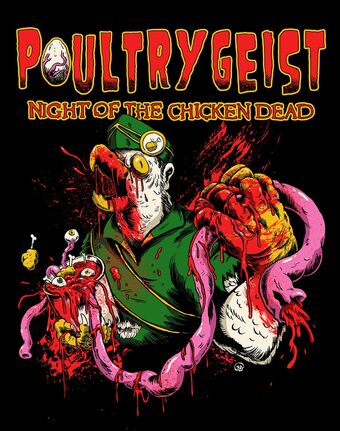 Poultrygeist, Night of the Chicken Dead. (2006)

There are a couple of things that are universally reliable and predictable in modern American life.

One, if you order a Big Mac, it’ll taste the same at any McDonald’s, whether it’s in  New Orleans or in Seattle.

Two, when you watch a Troma film, you’re gonna get nudity, bad jokes, gore, splatter, and lots of crass over-the-top body humor on a shoestring budget. Clearly, this isn’t a bad thing. Troma is a horror comedy staple that’s been churning out cult classics for nearly fifty years. Founder, writer, and director Lloyd Kaufman even released a how-to book called “Make Your Own Damn Movie!”

The studio that brought us Surf Nazis Must Die, Class of Nuke Em High, and The Toxic Avenger, (And NOW they’re own online streaming service) has also given us Poultrygeist: Night of the Chicken Dead.

It is their ode mashup to both zombie and desecration of cursed graveyard flicks. (Hello, POULTERGEIST!)

Our hapless heroes are high school sweethearts, Arbie and Wendy. Wendy is about to leave for college and leave her high school sweetheart, Arbie, behind. So naturally, they do what teens do to mark the occasion: Have sex in the sacred cemetery of the Tromahawk tribe, with the very graphic help of the local zombies, whose hands rise up out of the earth to give Arbie quite the assist. They narrowly avoid death, because said zombie arms opt to kill the neighborhood Peeping Tom instead.

Months later, Arbie returns to the site to pine for Wendy, only to discover the cemetery has been razed to make way for a fast-food chicken restaurant called American Chicken Bunker. A crowd of people, including the Collegiate Lesbians Against Mega-Conglomerates (CLAM), are protesting in the parking lot.

There’s a familiar face in the crowd. Much to Arbie’s dismay, college has turned Wendy into a liberal, protesting lesbian, who is waving a sign front and center outside the American Chicken Bunker. When Arbie sees Wendy making out with another member of CLAM, he decides to get his life together and win her back.

Unfortunately, he chooses to do that by getting a job at American Chicken Bunker. It would have been a bad decision on an normal day. But it was especially bad on the day a batch of cursed slimy, glowing chicken eggs end up in the food. Disaster! The Tromahawk tribe will have their revenge, and it begins with the creation of an army of haunted foul zombies. Literally foul, in all possible uses of the word.

I’ll save you the spoilers. But let me add that  Ron Jeremy has a cameo. And hats off to director Lloyd Kaufman for the very bold choice to shoot the demon diarrhea scene from the point of view of the toilet bowl. I’ll never be the same now that I’ve seen that!

As if ALL of this isn’t enough, it’s a musical. A MUSICAL!! ‘Nuff said.

So, without further ado, here is the official trailer AND a short making of video entitled, what else, “Behind the Cluck.” Enjoy!